Celebrity Wedding at the Bacara Resort and Spa

We had the best time doing hair and makeup for Casandra Estevez, Charlie Sheen’s oldest daughter, and her bridal party last weekend at the Bacara Resort and Spa!Check out the People Magazine post below to read more!

Charlie Sheen Has A New Role: Father Of The Bride. The Two and a Half Men star beamed and snapped photos as his daughter, Cassandra Estevez, exchanged vows with childhood sweetheart Casey Huffman at Santa Barbara’s Bacara Resort and Spa on Sept. 25. “He was clearly very proud of her,” says wedding planner Jill La Fleur of La Fleur Weddings & Events, who created the lavish day inspired by a mix of nature and old Hollywood glamour. “He had a big smile on his face.” The bride, 25, who met Huffman in junior high, walked down the aisle with her dad to the tune of “Flightless Bird” from the Twilightsoundtrack, carrying a bouquet of roses and calla lilies. The couple said their non-denominational vows under a four-post altar made of birch branches and decorated with white organza, florals and crystals. 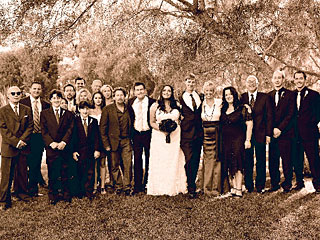 After the ceremony, the 165 guests, including Martin Sheen and Emilio Estevez, gathered for a reception in the hotel’s Rotunda Room. The decor included butterflies hanging from the ceiling, mercury glass votives and deep red roses for centerpieces. The newlyweds performed their first dance to Al Green’s “Let’s Stay Together.”
During the five-course meal, which included filet and shrimp, Sheen toasted his daughter and new son-in-law. “He told her how happy he was for her,” says La Fleur, “and then he teased the groom and made everyone laugh.”

the entire celebration was beautifully designed by jill la fleur….it was a truly lovely day….cassandra is the eldest daughter of charlie sheen….he was so sweet & doting, he even kneeled down during the ceremony to film the lovely couple saying their vows….the entire day was full of love & tenderness.